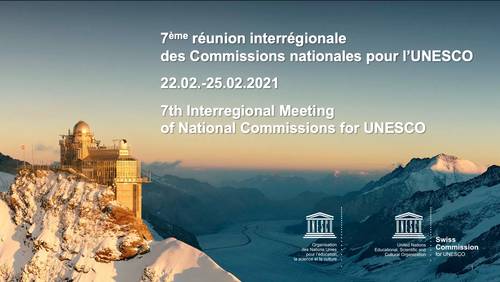 The 7th Interregional Meeting of the National Commissions for UNESCO took place online from 22 to 25 February 2021. Co-organized by UNESCO’s Sector for Priority Africa and External Relations and the Swiss Commission for UNESCO, this meeting served as a consultation in the process of elaborating UNESCO’s next policy documents and on the role of National Commissions in the context of the Organization’s strategic transformation. The meeting gathered some 450 representatives of almost 150 National Commissions from all 5 regional groups of UNESCO, Permanent Delegations, as well as UNESCO Secretariat and Field Offices.

The four-days meeting aimed to contribute to the ongoing elaboration process of the next Draft Medium-Term Strategy for 2022-2029 (41 C/4) and the Draft Programme and Budget for 2022-2025 (41 C/5) of UNESCO and provide platform for exchanging views on the role of National Commissions in the implementation of the Organization’s programmes and its Strategic Transformation. This Interregional meeting was also an opportunity to exchange experiences on actions undertaken or initiatives planned by the National Commissions, including those that are part of the response to COVID-19.

In her welcome address, delivered on the occasion of the opening ceremony, Ms Audrey Azoulay, Director-General of UNESCO, highlighted the capacity demonstrated by the National Commissions in mitigating and addressing the current global health, educational, social, and cultural crises. She also mentioned the crucial role played by National Commissions as liaison and coordination, consultation and information, and action entities. In this regard, the Director-General recalled the necessity for National Commissions to accompany UNESCO at the turning point, while Organization develop its Medium-Term Strategy to guide UNESCO’s through to 2030.

In his opening speech, Mr Ignazio Cassis, Head of the Federal Department of Foreign Affairs of the Swiss Confederation, emphasized the fields of Education, Sciences, Culture, and Information as essential elements in the realization of the peace, security and prosperity of humankind. He also reiterated the importance of the National Commissions as key players in the field to support the work of the Organization, whose role should be reflected in the next medium-term strategy.

On Tuesday, 23 February, National Commissions met by region to discuss intersectoral collaboration to strengthening UNESCO’s multidisciplinarity, their role in promoting and implementing UNESCO’s international cooperation, and the potential for change in the format and presentation of documents 41 C/4 and 41 C/5. They made recommendations, some of which have an interregional scope in the spirit of the meeting.

During the session on Strategic Transformation of UNESCO on Wednesday 24 February, Mr Xing Qu, Deputy Director-General of UNESCO highlighted the paramount importance of the four strategic objectives which are outlined in the Director General’s Preliminary Proposals for UNESCO’s new Medium-Term Strategy.  These objectives will help UNESCO to provide pertinent responses to contemporary challenges ensuring quality education for all, preserving the environment to build sustainable societies, reinforcing UNESCO’s core mandate to create peaceful societies, and positioning technology in the service of humankind. On the subject of UNESCO’s Global Priorities, Mr Qu asserted that UNESCO must be able to make concrete strides in advancing gender equality and working with partners in Africa for sustainable and inclusive development on the continent. While highlighting the critical importance of enhancing UNESCO’s actions towards priority groups, Youth and Small Island Developing States, to achieve the Sustainable Development Goals, Mr Qu expressed his appreciation for the role National Commissions played in contributing to the consultative process on Strategic Transformation. The National Commissions stressed the comparative advantage of UNESCO’s networks for the implementation of the Organization’s activities in the field and called for strengthening the Secretariat’s cooperation with them, in support of the policy paper “National Commissions for Renewed Multilateralism” presented at this interregional meeting.

The last day of the meeting was devoted to the presentation of completed or planned projects and initiatives from National Commissions. Some 17 National Commissions from Cameroun, Curaçao, Democratic Republic of the Congo, France, Germany, Islamic Republic of Iran, Honduras, Netherlands, Kenya, Morocco, Qatar, Republic of Korea, , Slovenia, Switzerland, Uganda, United Arab Emirates and United Kingdom presented their actions in response to the pandemic in such fields as education and capacity building, more generally in favour of interregional cooperation, culture, climate action, ethics of artificial intelligence and human rights.

In his closing remarks Mr Firmin Edouard Matoko, UNESCO Assistant Director-General for Priority Africa and External Relations, highlighted the crucial role of the network of National Commissions and their important contributions made on the occasion of consultations started in February and continued throughout July 2020. He also expressed his appreciation for the recommendations formulated during the 7th Interregional Meeting and confirmed the intention to continue strengthening the capacity-building of National Commissions in order to maintain and reinforce the permanent interaction and exchange with and among National Commissions, to encourage them to cooperate on the common initiatives, discuss the issues which are at the heart of our Organization’s agenda.

The President of the Swiss Commission for UNESCO, Mr. Thomas Zeltner, closed the meeting with gratitude for the great participation in this major online event. He expressed his empathy for all the National Commissions as actors in the field, with an extraordinary “convening power” to forge links, create opportunities for dialogue and facilitate the exchange of knowledge and experience. He welcomed the fact that this interregional meeting reaffirmed the role of National Commissions in the concrete implementation of UNESCO’s programmes and for a renewed multilateralism. Mr. Zeltner expressed the hope that the proposals resulting from the meeting would find an echo in the process of elaborating the next Medium-Term Strategy for 2022-2029 (41 C/4) and the Programme and Budget for 2022-2025 (41 C/5) of UNESCO, which is still under way.

For more information on the 7th Interregional Meeting of National Commissions, please consult this link.